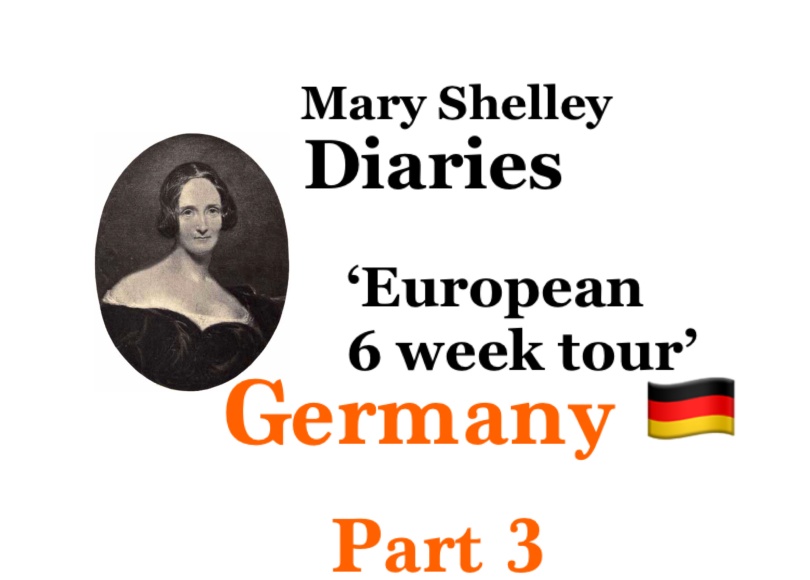 Before we slept, Percy had made a bargain for a boat to carry us to Mayence, and the next morning, bidding adieu to Switzerland, we embarked in a boat laden with merchandize, but where we had no fellow-passengers to disturb our tranquillity by their vulgarity and rudeness. The wind was violently against us, but the stream, aided by a slight exertion from the rowers, carried us on; the sun shone pleasantly, Percy read aloud to us Mary Wollstonecraft’s Letters from Norway, and we passed our time delightfully.

The evening was such as to find few parallels in beauty; as it approached, the banks which had hitherto been flat and uninteresting, became exceedingly beautiful. Suddenly the river grew narrow, and the boat dashed with inconceivable rapidity round the base of a rocky hill covered with pines; a ruined tower, with its desolated windows, stood on the summit of another hill that jutted into the river; beyond, the sunset was illuminating the distant mountains and clouds, casting the reflection of its rich and purple hues on the agitated river. The brilliance and contrasts of the colours on the circling whirlpools of the stream, was an appearance entirely new and most beautiful; the shades grew darker as the sun descended below the

horizon, and after we had landed, as we walked to our inn round a beautiful bay, the full moon arose with divine splendour, casting its silver light on the before-purpled waves. The following morning we pursued our journey in a slight canoe, in which every motion was accompanied with danger; but the stream had lost much of its rapidity, and was no longer impeded by rocks, the banks were low, and covered with willows. We passed Strasburgh, and the next morning it was proposed to us that we should proceed in the _diligence par-eau_, as the navigation would become dangerous for our small boat. There were only four passengers besides ourselves, three of these were students of the Strasburgh university: Schwitz, a rather handsome, good tempered young man; Hoff, a kind of shapeless animal, with a heavy, ugly, German face; and Schneider, who was nearly an ideot, and on whom his companions were always playing a thousand tricks: the remaining passengers were a woman, and an infant. The country was uninteresting, but we enjoyed fine weather, and slept in the boat in the open air without any inconvenience. We saw on the shores few objects that called forth our attention, if I except the town of Manheim, which was strikingly neat and clean. It was situated at about a mile from the river, and the road to it was planted on each side with beautiful acacias.

The last part of this voyage was performed close under land, as the wind was so violently against us, that even with all the force of a rapid current in our favour, we were hardly permitted to proceed. We were told (and not without reason) that we ought to congratulate ourselves on having exchanged our canoe for this boat, as the river was now of considerable width, and tossed by the wind into large waves. The same morning a boat, containing fifteen persons, in attempting to cross the water, had upset in the middle of the river, and every one in it perished. We saw the boat turned over, floating down the stream. This was a melancholy sight, yet ludicrously commented on by the _batalier_; almost the whole stock of whose French consisted in the word _seulement_. When we asked him what had happened, he answered, laying particular emphasis on this favourite dissyllable, _C’est seulement un bateau, qui etoit seulement renversèe, et tous les peuples sont seulement noyès._ Mayence is one of the best fortified towns in Germany. The river, which is broad and rapid, guards it to the east, and the hills for three leagues around exhibit signs of fortifications. The town itself is old, the streets narrow, and the houses high: the cathedral and towers of the town still bear marks of the bombardment which took place in the revolutionary war.

We took our place in the _diligence par-eau_ for Cologne, and the next morning (September 4th) departed. This conveyance appeared much more like a mercantile English affair than any we had before seen; it was shaped like a steam-boat, with a cabin and a high deck. Most of our companions chose to remain in the cabin; this was fortunate for us, since nothing could be more horribly disgusting than the lower order of smoking, drinking Germans who travelled with us; they swaggered and talked, and what was hideous to English eyes, kissed one another: there were, however, two or three merchants of a better class, who appeared well-informed and polite. The part of the Rhine down which we now glided, is that so beautifully described by Lord Byron in his third canto of _Childe Harold_. We read these verses with delight, as they conjured before us these lovely scenes with the truth and vividness of painting, and with the exquisite addition of glowing language and a warm imagination. We were carried down by a dangerously rapid current, and saw on either side of us hills covered with vines and trees, craggy cliffs crowned by desolate towers, and wooded islands, where picturesque ruins peeped from behind the foliage, and cast the shadows of their forms on the troubled waters, which distorted without deforming them. We heard the songs of the vintagers, and if surrounded by disgusting Germans, the sight was not so replete with enjoyment as I now fancy it to have been; yet memory, taking all the dark shades from the

picture, presents this part of the Rhine to my remembrance as the loveliest paradise on earth. We had sufficient leisure for the enjoyment of these scenes, for the boatmen, neither rowing nor steering, suffered us to be carried down by the stream, and the boat turned round and round as it descended. While I speak with disgust of the Germans who travelled with us, I should in justice to these borderers record, that at one of the inns here we saw the only pretty woman we met with in the course of our travels. She is what I should conceive to be a truly German beauty; grey eyes, slightly tinged with brown, and expressive of uncommon sweetness and frankness. She had lately recovered from a fever, and this added to the interest of her countenance, by adorning it with an appearance of extreme delicacy. On the following day we left the hills of the Rhine, and found that, for the remainder of our journey, we should move sluggishly through the flats of Holland: the river also winds extremely, so that, after calculating our resources, we resolved to finish our journey in a land diligence. Our water conveyance remained that night at Bonn, and that we might lose no time, we proceeded post the same night to Cologne, where we arrived late; for the rate of travelling in Germany seldom exceeds a mile and a half an hour. Cologne appeared an immense town, as we drove through street after street to arrive at our inn. Before we slept, we secured places in the diligence, which was to depart next morning for Clêves. Nothing in the world can be more wretched than travelling in this German diligence: the coach is clumsy and comfortless, and we proceeded so slowly, stopping so often, that it appeared as if we should never arrive at our journey’s end. We were allowed two hours for dinner, and two more were wasted in the evening while the coach was being changed. We were then requested, as the diligence had a greater demand for places than it could supply, to proceed in a _cabriolet_ which was provided for us. We readily consented, as we hoped to travel faster than in the heavy diligence; but this was not permitted, and we jogged on all night behind this cumbrous machine. In the morning when we stopped, and for a moment indulged a hope that we had arrived at Clêves, which was at the distance of five leagues from our last night’s stage; but we had only advanced three leagues in seven or eight hours, and had yet eight miles to perform. However, we first rested about three hours at this stage, where we could not obtain breakfast or any convenience, and at about eight o’clock we again departed, and with slow, although far from easy travelling, faint with hunger and fatigue, we arrived by noon at Clêves.